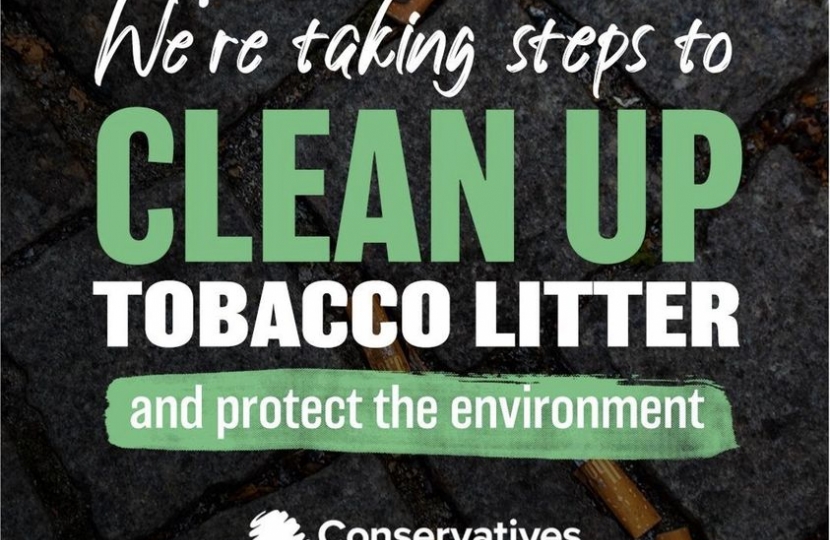 The government is considering measures to make tobacco companies reduce litter caused by their products to protect the environment and save local councils money.

New evidence reveals that cleaning up littered cigarette butts currently costs UK local authorities around £40 million per year. Despite smoking rates being at their lowest recorded level, cigarette filters continue to be the most commonly littered item in England, according to Keep Britain Tidy research, making up 68% of all littered items.

Among the options being looked at by Ministers is a regulatory extended producer responsibility scheme for cigarette butts in England, a new power currently being legislated for in the Environment Bill. This would require the tobacco industry to pay the full disposal costs of tobacco waste products, ensuring the sector takes sufficient financial responsibility for the litter its products create.

I am pleased to see the Government continue to focus on environmental improvements by tackling the issue of discarded cigarette butts.

The vast majority of cigarette butts are single-use plastic and contain hundreds of toxic chemicals once smoked. Littered cigarette filters can persist in the environment for many years and release these chemicals to air, land and water, harming plant growth and wildlife. As set out in the Litter Strategy for England, the most effective way to tackle smoking related litter is by reducing the prevalence of smoking in the first place. The Government is committed to addressing the harms from smoking and will publish a new tobacco control plan for England later this year to deliver its ambition of a smoke-free country by 2030.

The announcement forms the latest step in the Government’s fight against single-use plastics to protect our environment and clean up our oceans. The Government has already banned microbeads in rinse-off personal care products and prohibited the supply of plastic straws, stirrers and cotton buds in England. From the 1 April, the charge on single-use plastic bags was expanded to all retailers and doubled to 10p and a world-leading plastic packaging tax will be introduced from April 2022 for products which do not have at least 30% recycled content. Last week, the government also outlined its next steps to introduce a deposit return scheme to incentivise consumers to recycle more.