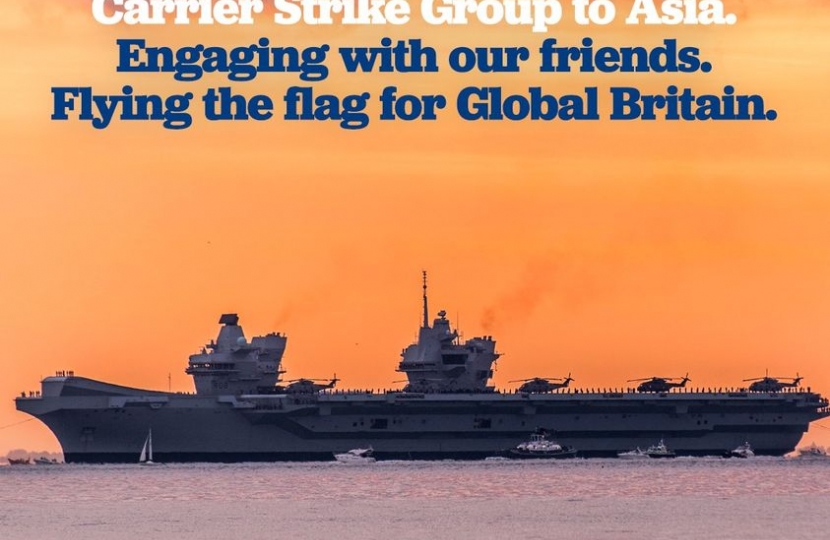 Aircraft carrier, HMS Queen Elizabeth, will lead Carrier Strike Group 2021 on an operational deployment to more than 40 countries for more than 70 engagements, projecting our influence and engaging with our allies

The UK Carrier Strike Group’s 28-week maiden deployment spanning 26,000 nautical miles, will conduct engagements with Singapore, the Republic of Korea, Japan and India as part of the UK’s tilt towards the Indo-Pacific region. .

When the Carrier Strike Group sets sail next month on its maiden operational deployment it will symbolise Global Britain in action. Our landmark review of foreign, defence, development and security policy, published last month, committed us to having the broadest, most integrated presence in the Indo-Pacific of any European country.

The HMS Queen Elizabeth Carrier will sail to India, Japan, South Korea, Singapore and the wider region next month, engaging in a series of events to maximise bilateral relations – benefitting our trade and political alliances. The ship will also conduct a series of joint military exercises, demonstrating our interoperability with allies and enhancing our capabilities to defend against shared threats.

This deployment will help further strengthen relationships across the globe and demonstrate our commitment to the Indo-Pacific region and confronting threats to international order.

HMS Queen Elizabeth, the most powerful surface vessel in the Royal Navy’s history, will be joined by a surface fleet of Type 45 destroyers, HMS Defender and HMS Diamond, Type 23 anti-submarine frigates HMS Kent and HMS Richmond, and the Royal Fleet Auxiliary’s RFA Fort Victoria and RFA Tidespring. Deep below the surface, a Royal Navy Astute-class submarine will be deployed in support, armed with Tomahawk cruise missiles.

On the carrier’s flight deck will be eight state-of-the-art RAF F-35B Lightning II fast jets. Alongside will be four Wildcat maritime attack helicopters, seven Merlin Mk2 anti-submarine helicopters and three Merlin Mk4 commando helicopters – the greatest quantity of helicopters assigned to a single UK Task Group in a decade. And supporting below deck will be a company of Royal Marines Commandos.

The forthcoming deployment will bolster already deep defence partnerships in the region, where the UK is committed to a more enduring regional defence and security presence. Ships from the Carrier Strike Group will participate in Exercise Bersama Lima to mark the 50th anniversary of the Five Powers Defence Agreement between Malaysia, Singapore, Australia, New Zealand and the United Kingdom. Engagements in Singapore, the Republic of Korea, Japan and India will provide the opportunity for strengthening our security relationships, tightening political ties and supporting our UK exports and International Trade agenda.