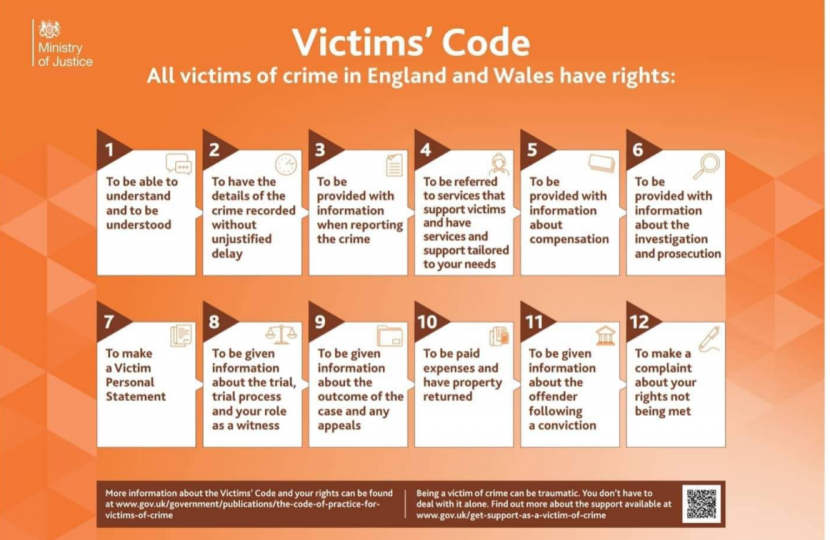 A new Victims’ Code came into force on 1 April that will give victims of crime better support from the police, courts and other criminal justice agencies.

Victims of crime will be told what to expect at every stage of the justice system including, for the first time, their automatic right to be told when a perpetrator is due to leave prison. Victims of sexual violence will be able to choose the gender of their police interviewer and there will be clearer advice on when they can have their evidence pre-recorded ahead of a trial – rather than face the stress of cross-examination in front of a packed courtroom. Where an offender is a foreign national offender, victims will for the first time have the right to know when they are deported.

This milestone will pave the way for a new Victims’ Law, on which Ministers will consult this summer.  It seeks to underpin victims’ rights in legislation and ensure justice agencies are held to account for delivering them.

This new Code provides victims with a simplified and stronger set of rights – making clear their entitlements at every step of the way as they navigate our justice system and recover from crime.

By reforming our criminal justice system, we are ensuring that it serves the law-abiding majority rather than the criminal minority and always holds the rights of victims at its heart.

The Code brings together 12 overarching rights that are straightforward, concise and easy to understand – outlining the minimum level of information and service victims can expect at every stage of the justice process. These include:

The new Code is part of recent action across government to restore confidence in the justice system. This includes a £100m investment into services tackling violence against women and girls, a landmark Domestic Abuse Bill to better protect victims and bring perpetrators to justice, and 20,000 extra police and new legislation to cut crime and boost public protection.  Meanwhile, hundreds of millions is being spent to deliver speedier justice for victims and reduce delays in courts caused by the pandemic.