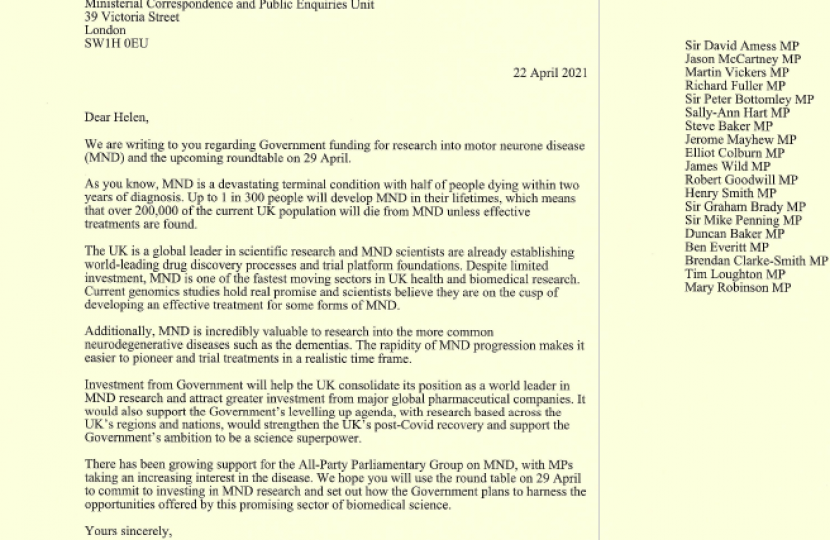 Richard Fuller, MP for North East Bedfordshire, has signed a letter to the Health Minister, Helen Whately, on the importance of investing in Motor Neurone Disease (MND) Research.

The letter, which was signed by 23 Conservative MPs, was sent ahead of a roundtable event the Minister is attending on 29 April with leading Motor Neurone Disease charities, scientists & campaigners.

My first encounter in detail with motor neurone disease was a number of years ago at meeting in Bromham organised by the North Bedfordshire branch of the Motor Neurone Disease Association which gave me some familiarity with the genesis and progression of the disease.

I have been monitoring the work of the All Party Parliamentary Group on MND and it has been heartening to learn of the progress in research since then. The UK is a global leader in scientific research and MND scientists are already establishing world-leading drug discovery processes and trial platform foundations and MND is one of the fastest moving sectors in UK health and biomedical research. Current genomics studies hold real promise and scientists believe they are on the cusp of developing an effective treatment for some forms of MND.

I was pleased to support this letter to the Minister calling on the government to invest greater funding in MND research.

The letter to the Minister highlights that investment from Government will help the UK consolidate its position as a world leader in MND research and attract greater investment from major global pharmaceutical companies. It calls on the government to commit to investing in MND research and set out how plans to harness the opportunities offered by this promising sector of biomedical science.

The full letter can be read here.