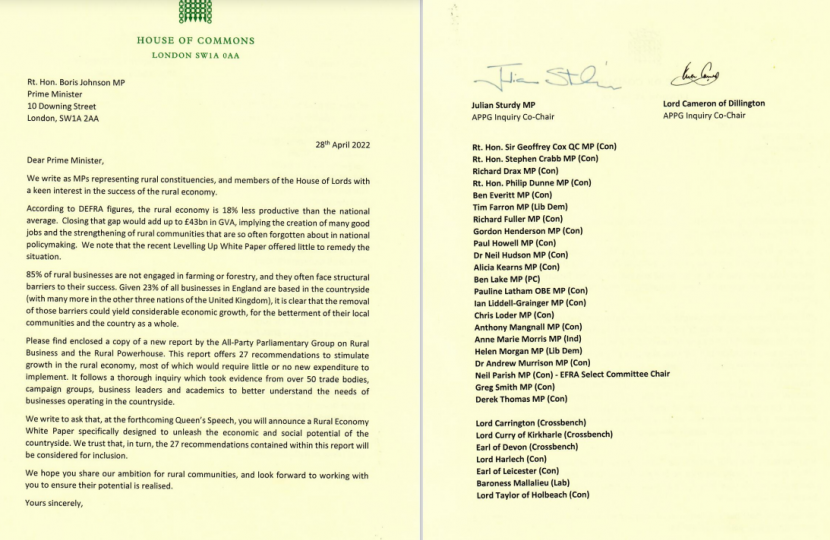 Richard Fuller MP has joined cross-party MPs and peers representing rural constituencies, in writing to the Prime Minister to request that new plans to unleash the economic potential of rural regions are included in next week's Queen’s Speech.

Last month, the All-Party Parliamentary Group (APPG) on Rural Business launched a comprehensive report based on its year-long inquiry into the health of the rural economy, which took evidence from over 50 witnesses from industry bodies, charities, campaign groups, companies, academics and business leaders.

Although 23% of all English businesses are based in the countryside, there is a productivity gap of 18% between rural areas and the national average, the ending of which could add a further £43 billion to the economy each year.

The report urges the government to be more ambitious in securing the future prosperity of rural Britain. It makes 27 policy recommendations Ministers could take up to boost growth in rural communities, including on tax, broadband and mobile coverage, skills training, planning, and government practices.

This letter, led by Julian Sturdy MP. asks the Prime Minister to use the opportunity of the Queen's Speech on 10th May, which will set the agenda for the new session of Parliament, to commit to implementing the report’s recommendations by announcing a White Paper on the Rural Economy,

The APPG on Rural Business's report identified how closing the productivity gap in rural areas would be worth up to £43bn in England alone, which could lead to the creation of hundreds of thousands of good jobs and the strengthening of rural communities.

We hope the Prime Minister shares our ambition for rural communities, ensuring their potential is realised.

The letter can be read here.