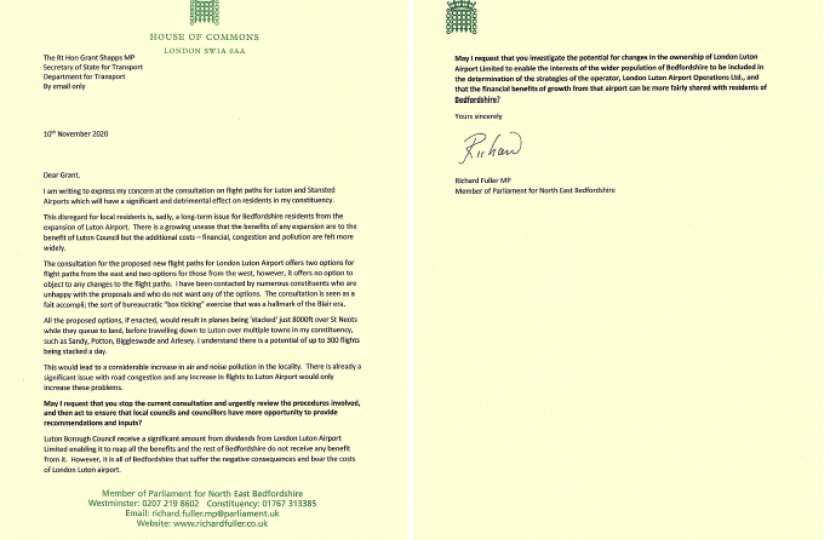 NATS, the air traffic services provider, and London Luton Airport (LLA) have launched a consultation on changing the arrival flightpaths into Luton Airport. The Airport currently shares arrival routes and two holds with Stansted Airport and the consultation is seeking views on separating LLA’s arrivals flightpaths from Stansted’s and establishing a new hold for LLA.

Commenting, Richard said: "The consultation offers two options from flight paths from the east and two options from the west, however, it offers no option to object to any changes to the existing flight paths. All of the options would have noise and air pollution consequences for many towns and villages in NE Bedfordshire, including Arlesey, Biggleswade, Potton and Sandy. I have real concerns about the way in which this consultation has been handled, which is why I have written to the Secretary of State to raise my objections.

"The absence of appropriate involvement of local authorities or local councillors during the phase of determining options has led to a considerable restriction on local democratic accountability.  As a result, local residents are forced to choose between unattractive alternatives and given no option to recommend other potential outcomes which would have a less intrusive impact on air pollution and noise pollution."

To take part in the consultation, which ends on 5 February 2021, visit: https://consultations.airspacechange.co.uk/london-luton-airport/ad6_luton_arrivals/consultation/intro/

The UK has signed an agreement with the French Government to tackle illegal migrant activity in the Channel – the latest step forward in our shared mission to make channel crossings completely unviable.