Richard's views on the proposed increase in National Insurance to fund Social Care and the NHS. 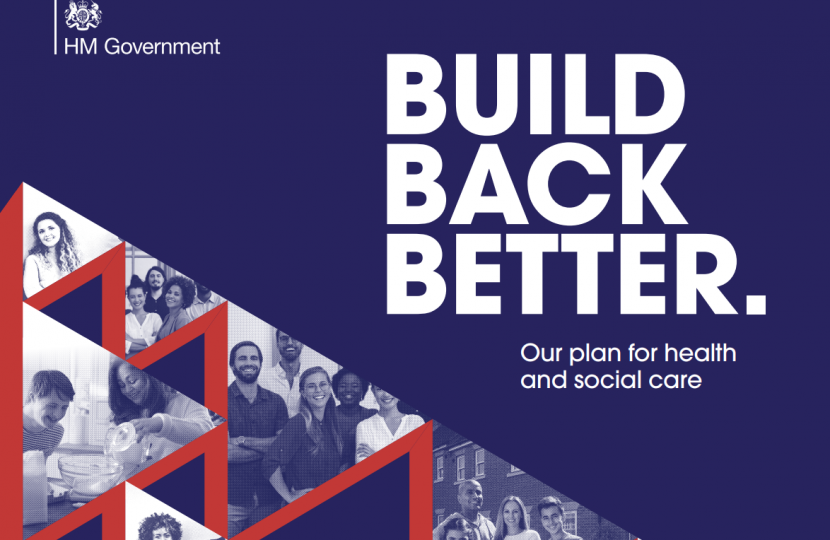 Today, the House of Commons will debate yesterday's announcements regarding social care and the NHS. Richard is hoping to speak in the debate and if called to speak, his speech will be posted in a subsequent website article. In the meantime, speaking ahead of today's debate in the House of Commons, Richard said:

"The Prime Minister has announced a plan for reform of social care together with additional funding to support the NHS deal with the backlog in cases caused by COVID restrictions and an increased level of investment in technologies to assist critical diagnoses.  The government’s plan is available to review here.

These measures will increase the opportunity for families to pass on their family home or other modest assets to their children.

The Institute for Fiscal Studies has noted that this will increase the total level of taxation to the highest share of national income in our history.  In my view, this level of taxes will reduce incentives, restrain growth and overtime lead to a lower level of actual taxes raised.

In 2020, taxes raised £600bn whilst government spending topped £900bn, with COVID costs alone estimated to cost £400bn.  One pound in every three pounds is already being borrowed to fund public expenditures.  More worryingly still, for each pound that is being borrowed, 80 pence is being printed by the Bank of England rather than being borrowed from investors seeking a return.

In my view this cannot continue and an important counterpart to additional social care expenditures is reductions in other areas of government spending.

It is important that the Chancellor uses his budget on 27th October to bring forward measures to improve efficiencies across the public sector so that the demand on taxpayers is reduced.  He needs to outline a path to reducing tax levels progressively as the exceptionalism of the last year passes.

This new tax will also break a commitment in the Conservative manifesto that there would be no increases in income taxes, VAT or national insurance.  There is no ducking this especially as I will be supporting the Government in Parliament.  Conservative voters have every right to question why the government they voted for is making such a drastic move.

The Prime Minister laid out the first response to this which is that the COVID pandemic and the measures taken to support the NHS, to develop  and distribute vaccines and to protect jobs and businesses were not anticipated in 2019 and the government cannot ignore the £400bn hole in public finances this has caused.  For prudent reasons, the gap between taxes and expenditures needs to be closed.

The Prime Minister also laid out the second response which was that reform of social care has been ducked by governments stretching back to that of Gordon Brown.  With each year, more families face crippling care costs and many more find their savings dwindling by the day.  The Prime Minister believes it is time to enact the reforms that others have ducked but he recognises that in doing so he cannot rely on further borrowing: the costs have to be taken on by taxpayers.

It has been depressing to read the immediate responses of health care lobby groups who pocket all that is provided and then ask for more.  The NHS should not swallow this latest substantial increase in funding and then not challenge itself to reform, nor provide adequate access to their GP for my constituents, nor achieve even the modest productivity improvements currently asked of the service.

I want to see a reform of social care which eliminates the excessive cost risk for families.  I recognise that a private insurance market for these risks cannot exist without significant state intervention.  I also recognise that for a period at least, taxpayer support is required as care services are reformed.  As of today, these guarantees are not in place.  As your representative in Parliament, I am placing considerable faith in the government that these will be in place by the time the reforms are implemented in 2023.  The government and the NHS must deliver."

On Monday, the government published the policy proposal for mandatory vaccine certification in certain settings as a contingency measure under the government’s Autumn and Winter Plan, in the event that that the NHS is likely to come under unsustainable pressure. The government is asking for views