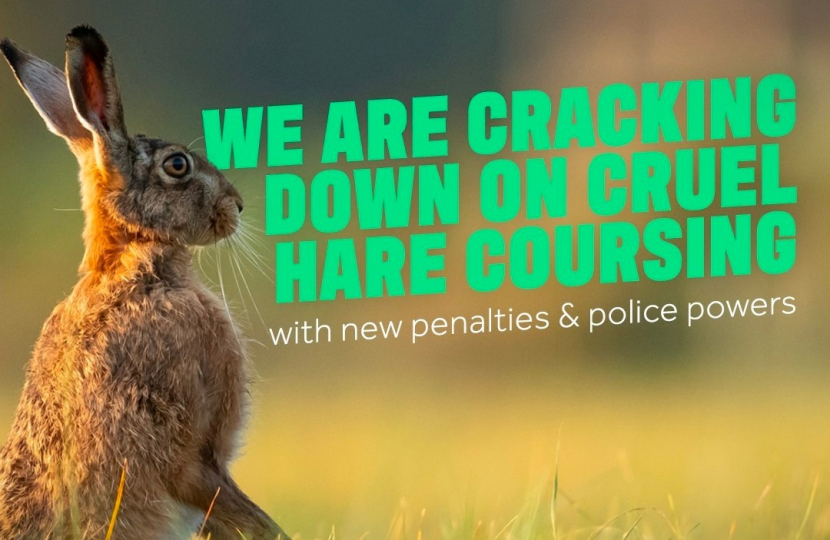 Tough new measures to tackle the cruel practice of hare coursing come into force on 1 August 2022. Anyone caught hare coursing will now face an unlimited fine and up to six months in prison.

Hare coursing - an illegal activity where dogs are used to chase, catch and kill hares – is a serious problem in rural areas like North East Bedfordshire. Not only does it involve cruelty to wild animals, it is also associated with a range of other criminal activities, including theft, criminal damage, violence and intimidation.

Brown hares are widespread across the UK but numbers are declining and are now estimated at less than half a million in England.

I am delighted that the changes to the laws on hare coursing that myself and many others fought for are now in force.

My Private Member's Bill sought to give the police more powers to prosecute offenders and also to make the penalties far more severe for those committing this barbaric practice. I am very pleased that the government adopted the proposals in full by incorporating them into the Police Crime Sentencing and Courts Act 2022 which is now in force.  This legislation achieves the goals in my PMB and I look forward to seeing successful prosecutions in the weeks and months ahead

These new measures strengthen law enforcement for hare coursing by increasing the maximum penalties for convictions under existing legislation, introducing new criminal offences and new powers for the courts to disqualify convicted offenders from owning or keeping dogs. They include: